I have yet to find any evidence to dispel this theory so if you have or find something to contradict it, please let me know!

There are competing points of view as to the exact origin of Charles Walton, which is not surprising considering the lack of definitive evidence. The most common guess as to his origin, per others’ research, is that Charles’ parents were Joseph Walton and Elizabeth Baskerville Walton. I have never seen one piece of evidence to support that notion and as recorded, Joseph and Elizabeth were from Cheshire, not Middlesex where Charles was born. That said, it’s not important to this hypothesis.

We know that Charles was born in Middlesex because it’s stated on his Royal West India Rangers enlistment in the Description Book of the Royal West India Rangers. There is also a town listed for place of birth, but it’s difficult to decipher. It also states that Charles was in the Surrey Militia before joining the Rangers on May 3, 1811 and that he was a Cordwainer (shoemaker) by trade. There was also a second Charles Walton in the Surrey Militia who was still enlisted and active after May 3, 1811 which is after the first Charles enlisted in the Rangers.

It is known that the Royal West India Rangers were made up largely of petty criminals and deserters from other regiments.

There was a well-known Charles Walton (alias Davis) of the 5th Regiment of the 1st Surrey Militia, born about 1787, who deserted his post in the summer of 1810 and there are many documents related to him in the Proceedings of the Old Bailey and the London newspapers from that time. He was well-known because he was arrested in late August of 1810 for being part of a coining outfit (counterfeiters). Other gang members included Sarah Slater, Joseph Cope, Robert Butt, Mary Walton (alias Butt), and William Stafford. The ring was busted after a sting operation setup by Stafford, who turned witness to the official coin mint and he then testified against the rest of the gang at trial. A side note I find interesting is that Stafford was not only a deserter, he was also a fellow cordwainer by trade.

Stafford’s testimony was least damning to Charles Walton. Indeed, he testified that Charles wasn’t even present at the gang’s meetings and had only arrived a few weeks prior to their arrest. From his description of events, Charles was drawn into a minimal role in the gang by his wife, Mary, after she had taken up with one of the other gang members, Robert Butt, during Charles’ time in the Surrey Militia. This seems as good a reason as any for Charles to desert.

At trial, most other gang members were convicted then either executed or transported to Australia. Charles was acquitted of coining offenses but later convicted of deserting the Surrey Militia. Just a few months prior to the Royal West India Rangers enlistment of Charles Walton,  there was a report in the London Observer newspaper, page 3, on Nov 11, 1810 reading as follows, “A man of the name of Charles Walton, who was tried at the last Old Bailey Sessions for coining, but acquitted on a point of law, was brought to the Public Office in Worship-street on a charge of enlisting into different regiments and receiving bounty money from each, and afterwards deserting. The Magistrate ordered an Office to convey him to the Savoy”. The Savoy was a military prison and I can see how someone who spent a few months there might be tempted to join the Rangers to get out.

Fast forward a couple decades and one final point on this subject is that those who know of Charles Walton of Aroostook County, know the story of when his future son-in-law, George B Brown, deserted the British army and was captured and beaten by American forces, only to be saved by Charles, who intervened. It seems to me that a fellow deserter would have sympathy for George since he knew the kind of fate awaiting him for deserting.

If this is indeed the same Charles Walton, it’s no wonder we don’t know this part of his past. 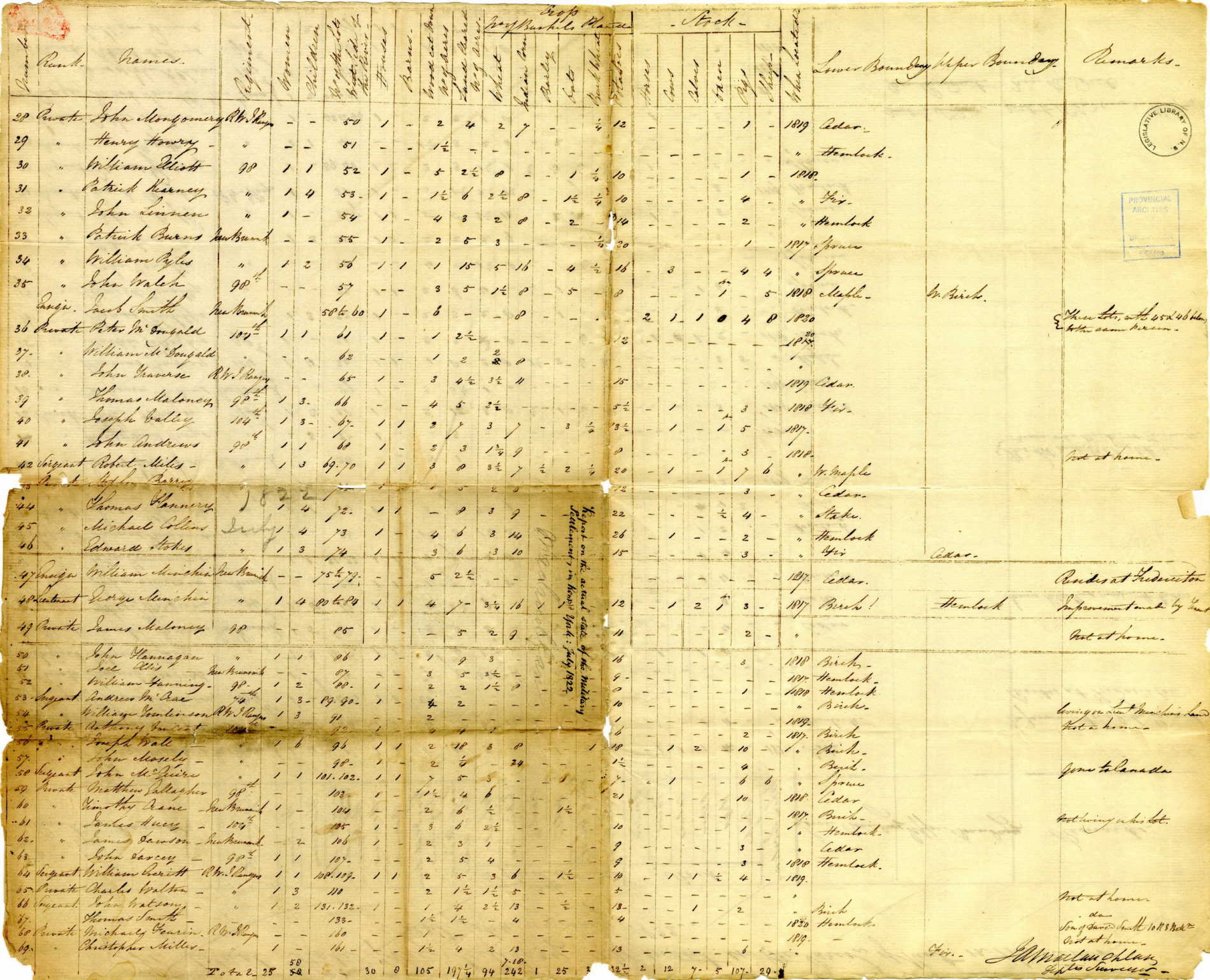 - New Brunswick, Canada
Settlers and the amount of progress they had made in establishing a home on the land they were granted. 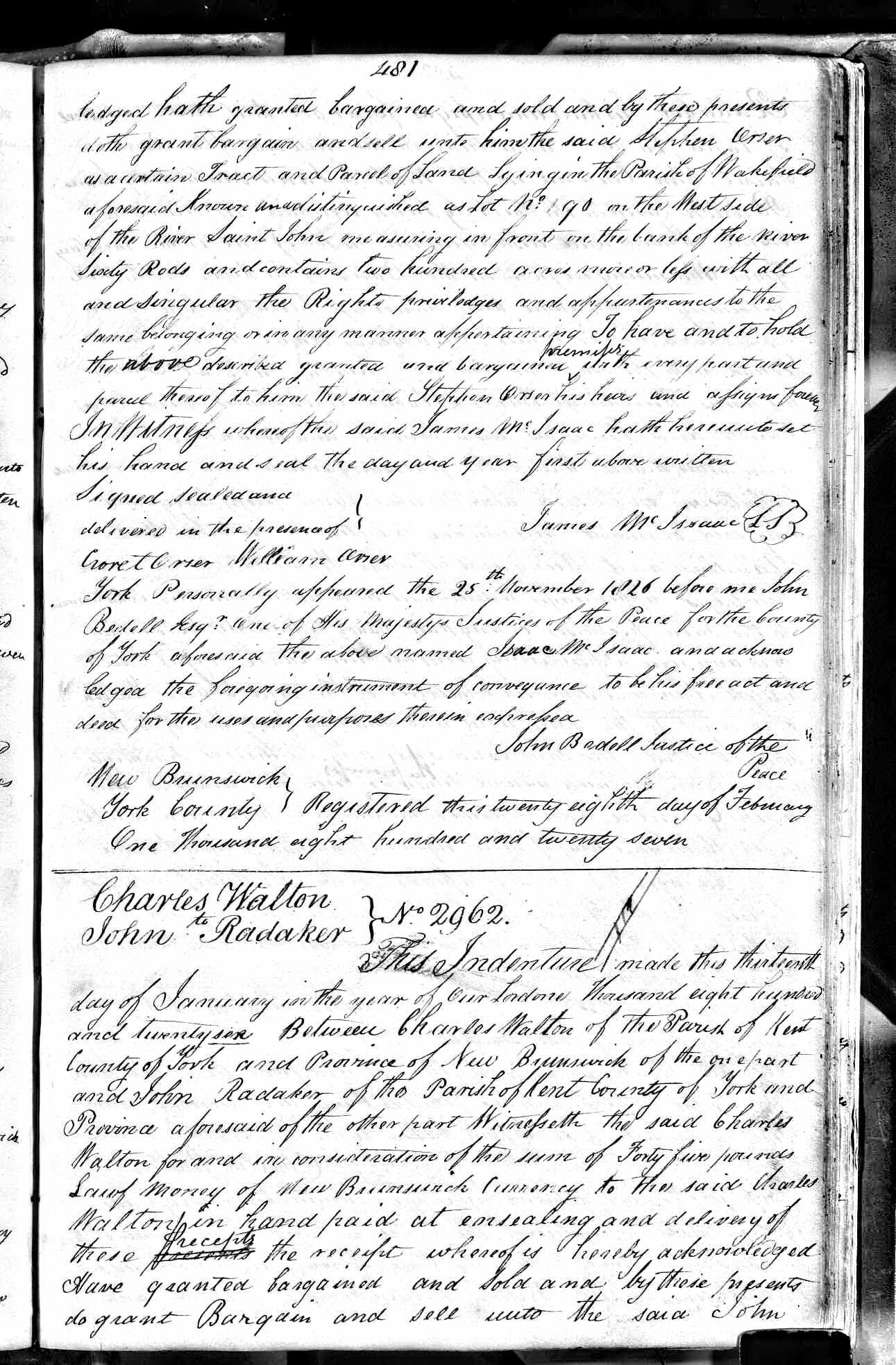